With the -p/--plot option, a plot is produced from the jobstats for each
jobid.  Plots contain one panel per booked node showing CPU (blue) and memory
usage (black) traces and include text lines indicating the job number, cluster,
end time and duration, user, project, job name, and usage flags (more on those
below).  For memory usage, one or two traces are shown: a solid black line
shows instantaneous memory usage, and a dotted black line
shows overall maximum memory usage if this information is available.

Plots are saved to the current directory with the name

To view the images you can either download them from UPPMAX, or use Xforwarding. The latter is the quickest way. To do this you will need to connect to UPPMAX with the -Y option

and then you can use the image viewer eog to view the files.

For this to work you will have to use a computer that has a X-server. Most linux systems have this by default, and Macs used to have it as default before they removed it during 2014. To get this feature back you have to install Xquartz. If you are using a Windows computer you can download the program MobaXterm which is a ssh client with a built-in X-server. 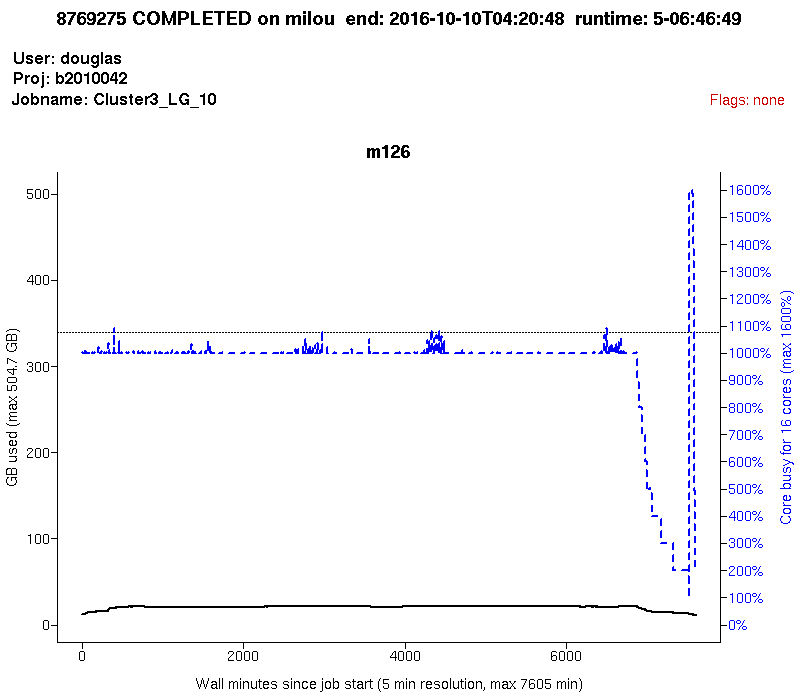 For multiple-node jobs, plots have a two-column format.

Note that not all jobs will produce jobstats files, particularly if the job was cancelled or ran for less than 5 minutes. Also, if a job booked nodes inefficiently by not using nodes it asked for, jobstats files will not be available for the booked but unused nodes. In this case the plot will contain a blank panel for each such node together with the message 'node booked but unused'.

When you are looking through the plots you just created you can start thinking of how you can change your bookings so that the jobs are more efficienct. Usually it's just a matter of changing how many cores you book and the problem is solved. Here are some guidelines that you can follow when looking for ineffecient jobs:

If you follow these guidelines you will be using the resources efficiently. If everyone did this there would probably not even be a queue to run your jobs most of the time. Of course there are grey areas and jobs that have a very random ram requirements. In these cases it is hard to get efficient usage, but they are few and far between.

Here are some examples of how inefficient jobs can look and what you can do to make them more efficient.

The job numbers valid on the cluster. finishedjobinfo is used to determine further information for each job. This can be rather slow, and a message asking for your patience is printed for each job. If multiple queries are expected it would be quicker to run finishedjobinfo yourself separately, see Mode 4 below. See Mode 2 for a currently running job.

Job numbers of jobs currently running on the cluster. The SLURM squeue tool is used to determine further information for each running job.

finishedjobinfo is not called and Uppmax's stored job statistics files for the cluster of interest are discovered directly. If you know which node(s) your job ran on or which nodes you are interested in, this will be much faster than Mode 1.

When providing a project name that is valid for the cluster, finishedjobinfo is used to determine further information on jobs run within the project. As for Mode 1, this can be rather slow, and a message asking for your patience is printed. Furthermore only finishedjobinfo defaults for time span etc. are used for job discovery. If multiple queries are expected or additional finishedjobinfo options are desired, see Mode 5 below.

Accept input on stdin formatted like finishedjobinfo output. Note the single dash (-) option given to jobstats; the long form of this option is --stdin. This mode can be especially useful if multiple queries of the same job information are expected. In this case, save the output of a single comprehensive finishedjobinfo query, and extract the parts of interest and present them to this script on stdin. For example, to produce analyses of all completed jobs in a project during the current calendar year, and produce separate tarballs analysing all jobs and providing jobstats plots for each user during this same period:

jobstats -h may be specified to get detailed help including a complete list of command line options.

This script produces two types of output. If the -p/--plot command line option is provided, a plot is created of core and memory usage across the life of the job. The name of the file produced has the format:

Unless the -q/--quiet option is provided, a table is also produced containing lines with the following tab-separated fields:

If -r/--running was used, an additional field is present:

At completion of the script, a brief summary is produced:

*** No jobstats files found for 25 out of 56 jobs, limited resource usage diagnosis and no plot produced

An important part of jobstats output are usage flags. These provide indications that booked resources might have been underused, either processor cores, or memory, or both.

In both plot and table output, flags are a comma-separated list of cautions regarding core and/or memory underutilisation. The appearance of a flag does not necessarily mean that resources were used incorrectly. It depends upon the tools being used and the contents of the SLURM header, and also depends upon the job profile. Because usage information is gathered every 5 minutes, higher transient usage of cores or memory may not be captured in the log files.

For multinode jobs, flags other than nodes_overbooked are determined based only on the usage of the first node. Multinode jobs require careful analysis so as to not waste resources unnecessarily, and it is a common mistake among beginning Uppmax users to book multiple nodes and run tools that cannot use more than the first. In this case, nodes_overbooked will appear.

Some flags have a threshold below which they appear. The default format is generally flag:value-booked:value-used.

By default no flags are indicated for jobs with memory-only cautions except for swap usage, because it is common for jobs to heavily use processor cores without using a sizable fraction of memory. Use the -m/--memory option to include flags for memory underutilisation when those would be the only flags produced.

More verbose flags are output with the -v/--verbose option.